CHICAGO (jGLi) – A small group of Filipinos from my home province of Sorsogon in the Philippines was looking forward to a hearty breakfast in the Twin Towers in New York City, New York 10 years ago.

But the jetlag of the late arriving party and the long drawn-out conversations of the others waiting for them at Beacon Hotel on 72nd Avenue in New York City spilled into the small hours of the morning, prompting the group to move their meeting from breakfast to “brunch” (breakfast-lunch) between 10:30 and 11 a.m. on Sept. 11, 2001.

My friend, Joesan Gabarda, of Troy, Michigan and Sorsogon City, recalled that he was about to leave their Beacon Hotel and hail a taxi that would take him and some of his companions to the Twin Towers on Sept. 11 when he saw live on television that day that the Twin Towers were burning.

“If the late arriving party did not complain of being tired from the trip and if the others did not extend their conversations well into early in the morning, we would have rushed to the Twin Towers at 8 a.m., the exact time when the two planes hit the buildings. I am very sure we would have been among the victims of that tragic event.” Gabarda, a Filipino American anti-graft advocate, now muses.

OTHER MEMBERS OF SORSOGON TOURISM COUNCIL

Among the officers and members of the Council were Sorsogon’s Filipino American Attorney Loida Nicolas Lewis (chair) and her brother, Francis Nicolas, Wilfredo “Buboy” Duana and his wife, Cherry, and his mother, Milagros Duana, Cecilia Duran of Sorsogon City’s Fernando Hotel, Cecilia Capinpin and Eddie Chua.

Gabarda said Eddie Chua, Buboy and Cherry arrived from the Philippines in the morning of Sept. 10. So, he and Fernando Laban of New Jersey picked up the three at the Newark, New Jersey airport. They brought the three new arrivals straight from the airport to Philippine Trade Center to catch the presentations of artifacts.

In the afternoon, some in the group took the stuff of the new arrivals to Beacon’s Hotel and together with rest of about 30 to 50 guests, they proceeded to the two-floor Central Park condominium of Atty. Lewis, who hosted a dinner party.

While most of the guests took cabs to go to the hotel after the dinner party, others, like Joesan, Cherry, Buboy and Francis, decided to walk from the Central Park condominium on 5th Avenue to Beacon Hotel at 72nd Avenue. It must have been a long walk, he remembered it was almost 3 a.m. in his watch and he was dead tired when they reached the hotel.

“When I saw TV footages with the jets hitting the Twin Towers, I thanked God and congratulated our group, telling them, ‘we were survivors.” Gabarda said.

He said that while everybody were scampering from the Towers, he and Eddie Chua were curious so they tried to take a cab going to the Towers. But they could not flag down a cab. They went to catch a train at the subway but there was no train to catch either.

TRAPPED FOR TWO DAYS IN NY

Since nobody can get out, “we were trapped for two days in New York.” Everyone was being inspected and was properly identified. Atty. Lewis later invited the group to her home at South Hampton, Long Island for a get-together.

Atty. Lewis was so nervous she did not ride her car but decided to “join me and Eddie Chua in my small run-down P.T. Cruiser” to her South Hampton home.

Eddie Chua later joined him in his trip back to Michigan and Eddie flew to California after three days.

Among the artifacts presented on the eve of 9/11 were paintings that were being exhibited in the Sorsogon Tourism Council now being run by Ms. Sylvia Perdigon, a coordinator of Sorsogon’s governor’s office.

Gabarda said when he noticed that the Sorsogon provincial government was taking an active hand in running the affairs of the Sorsogon Tourism Council, he resigned from the position. “After my resignation, Atty. Lewis followed suit,” Gabarda said.

He believes the Sorsogon Tourism Council is better left to the non-government organizations (NGO’s), with the government “just supporting role.”

It is unfortunate that the government is always interested in raising sponsorship money on behalf of the council. But the money is not flowed back to the projects of the council. The money lines the pockets of those running the council, Gabarda rues.

Gabarda said his original group, who “survived” the 9/11, had a reunion a year later in the condominium of Atty. Lewis at Rockwell in Makati City. But they might reminisce again about “our second life” in another reunion, maybe sometime in the future.

“Meanwhile, let’s pose for a moment to pray for those, who were not as lucky like us, who survived,” he said. 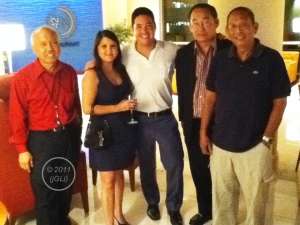 Joesan Gabarda (extreme right), a 9/11 “survivor,” is shown in this photo with this columnist (extreme left), when they met at Detroit Marriott at the Renaissance Center in Michigan last Aug. 10. Others in photo from left are Brooke Camp, a CNN recruiter, Curtis Lee Jay, news anchor of “Action News” of NBC in Kansas City, Missouri, a grandson of Felino Lee of Magallanes, Sorsogon and Bobby M. Reyes of Sorsogon City and Mabuhay Radio based in Los Angeles, California. (© 2011 jGLiPhoto) //