CAROL STREAM, Illinois (FAXX/jGLi) – Filipino American business tycoon Loida Nicolas Lewis, co-leader of the U.S. Pinoys For Good Governance (USP4GG), disclosed here on the eve of the start of the absentee voting for overseas Filipinos on Friday (April 12) that USP4GG is endorsing at least eight of the 12 Team PNoy senatorial candidates to give President Noynoy Aquino a majority in the Philippine senate for the next three year. But she clarified the endorsement should “not let [President Aquino become] a dictator but only to get things done properly.”

The ageless and tireless civil rights activist said USP4GG would also be campaigning for the election of two Independent candidates (Edward Hagedorn and Bro. Eddie Villanueva) “who are straight (honest) at hindi ipagbibili ang bayan(who will not betray the people). But she will be campaigning against a senatorial candidate accused of murdering an actor during martial law (Rep. Jack Enrile).

The credibility of the USP4GG gained traction in 2010 elections when majority of its endorsed senatorial slate in the 2010 won in the presidential elections, including then Sen. Noynoy Aquino, who won the presidency. But its vice presidential bet, former Senator and now DILG Sec. Mar Roxas, lost to former Makati City Mayor Jojo Binay. There are about 900,000 registered Filipino overseas voters.

A Makati city resident and former law classmate of Vice President Binay, Attorney Lewis said she would still be backing Secretary Roxas if Mr. Roxas and Mr. Binay would have a return bout in the 2016 presidential elections.

She said Mr. Binay simply cannot toe the line of President Aquino’s call for a “tuwid na daan” (straight path) as Vice President Binay has surrounded himself with corrupt underlings with the likes of former Sen. Ernesto Maceda, who was accused of car smuggling and human trafficking while Philippine Ambassador to the United States under the President Joseph “Erap” Estrada Administration.

While then Mayor Binay was giving away birthday cakes to senior citizens of Makati, these cakes came from Binay’s bakery. A resident of luxury Rockwell condominium in Makati, Ms. Lewis said in every high-rise tower built in Makati, Mr. Binay has one condominium unit, like his daughter, who has a penthouse at Rockwell.

At the same time, the Bicolana businesswoman and lawyer from Sorsogon province is raising funds for the campaign of Atty. Leni Robredo, the widow of the late iconic DILG Secretary Jesse Robredo, who is running for congress of the third district of Camarines Sur under President Aquino’s Liberal Party. Mrs. Robredo, a very poor candidate, is running against a well-ensconced political dynasty — the wife of incumbent termed-out Rep. Luis R.  Villafuerte – Atty. Nelly Favis-Villafuerte, former Trade and Industry Undersecretary a columnist of Manila Bulletin.

The philanthropist urged Evelyn de la Rosa Tolledo, president of Chicago’s suburban Schiller Park, Illinois-based Bikol U.S.A. of the Midwest, to help her appeal to fellow Bikolanos to raise funds for Mrs. Robredo that Attorney Lewis will match and would turn over by April 30, 2013 to Mrs. Robredo. Ms. Tolledo, a native of Catanduanes, can be reached at 3809 Emerson Drive, Schiller Park, Illinois, 60167 U.S.A., Tel. 773.946.9668, or email address:evelynbikolusamid@gmail.com.  Checks are payable to Loida N. Lewis and at the memo of the check, “In Trust for Leni Robredo.”

In brief remarks before members of the Filipino community, Ms. Lewis thanked the community for supporting the causes of USP4GG, among them the election of President Aquino last May 2010. She said President Aquino needs continued support of overseas Filipinos for keeping his word to eliminate corruption in the Philippine bureaucracy. She credited Mr. Aquino with the impeachment of former Chief Justice Renato Corona and the passage of the contentious RH Bill, which spells out the need for spacing the children, which is vigorously opposed by the Catholic Church.

Lewis said, “If we don’t give women the right to decide the number of children in the family, the Philippines will lose its ability to find jobs for these children. This will force Filipinos to go to the ends of the world. Filipinos have now relocated to every part of the earth, including the God-forsaken and the coldest place on earth, Antarctica, where studies on earth are being carried out. There are three Filipina nurses working in Antarctica. There are even 2,000 families living in La Loma Cemetery in Manila and even under bridges.

“If you send your children to school, go to a puericulture center to get advice when pregnant and how to feed babies right and undergo vaccination and health check ups, the government gives away 1,500 Philippines pesos (US$36.00) a month under the Conditional Cash Transfer (CCT). This is the program that weakens the existence of the New Peoples Army because the government is now taking care of the poorest of the poor in the Philippines,” she said.

The other speaker at the community interaction was Judge Jessica O’Brien, the first Filipino American elected Cook County Circuit Court judge, who narrated her early struggles growing up in Mandaue City in the Philippines.

Being endorsed as one of the three Party-List Representatives are No. 117. Akbayan Citizens’ Action Party; No. 127. Ang Nars, Inc.; and No. 129. Coalition of Association of Senior Citizens in the Philippines; and being junked from senatorial slate is Rep. Jack Enrile.

Mrs. Lewis added Pia Cayetano into the mix for supporting the “RH” (Reproductive Health) bill. But Cayetano is not a candidate in next month’s elections  either as her term would still end in 2016. She might have in mind Cayetano’s younger brother Alan Peter Cayetano, who is also a part of Team PNoy and was one of the 13 senators who also voted for the passage of the RH bill.

Although, Senator Escudero is not in the endorsed list, Attorney Lewis is campaigning personally for Mr. Escudero, not only because he is her fellow Sorgogueno but Mr. Escudero has not been accused of big-time corruption baka maliliit lang (maybe petty ones). Although Mr. Escudero has not done anything to improve Sorsogon province except for the appropriation of 500,000 pesos (US$11,904.00) for a book on Sorsogon, he could not be entirely blamed because during the term of Gloria Macapagal Arroyo, Mr. Escudero was never allocated his pork barrel.

As former classmate of the mother of actor Alfie Anido, Sarah Serrano, at St. Theresa’s College, Mrs. Lewis said the family of Anido did not pursue the investigation of the murder of Anido whose death was being pinned on Jackie Enrile because during martial law the truth could not be established. She urged Filipinos to junk the senatorial candidacy of Jack Enrile even if Senate President Enrile will be mad at her.

Mrs. Lewis also accepted an invitation from Ms. Evelyn Tolledo to be the guest of honor and speaker of the 31st national convention of Bikol National Associations of America from July 25 to 27, 2014 to be held in Chicago area. The BNAA will be holding its 30th national convention this year at Oriental Hotel in Legazpi City from July 16-18 in cooperation with the Department of Tourism.

Among the initial donors for the Leni Robredo campaign fund drive are Bikol U.S.A of the Midwest, $100; and its members, Bob Tolledo, $20.00; Tony Blando, Romy Sarcilla of World Financial Group and Danilo Auro, $10.00 each; and Jun Delfin of Chicago’s suburban Palatine-based Unlimited Agency, Inc., $50.00.

Tony Blando, a classmate of Jesse Robredo and Joel Anselmo Cadiz, President Aquino’s former lawyer and Solicitor General and two-time president of Integrated Bar of the Philippines and running under Aquino’s Liberal Party banner, said Attorney Cadiz is facing termed-out 77-year-old Rep. Luis R. Villafuerte Sr. of the Nationalist People’s Coalition (NPC) and the latter’s 23-year-old grandson, Miguel Villafuerte, of the Nacionalista Party, for the gubernatorial race in Camarines Sur. Mr. Cadiz had earlier requested his classmate, former Philippine prosecutor Carlos A. Cortes, Jr., a Chicago immigrant, to return to Camarines Sur to help him run for governor. Mr. Blando asked Attorney Lewis to support Mr. Cadiz if only to help totally topple the Villafuerte dynasty in the province..

Ms. Lewis was in town to speak on April 12-14 before “Billionaire’s Expo” at the Holiday Inn & Suites at 150 S. Gary Avenue here sponsored by IPJM in cooperation with twice-monthly Fil-Am MegaScene published and edited by Bart & Yoly Tubalinal of nearby Buffalo Grove, Illinois. The other featured guests at the event were Bishop Abraham Gaor, founder, “School of Wealth & Success,” and Pastor Armand Cudia, author of Shepherds Into Kings, Ms. Irene Alano-Rhodes of “Miss Saigon,” West End Theater, London and Dany Juat of “Papuri” singing group and IPJM Band. (lariosa_jos@sbcglobal.net) 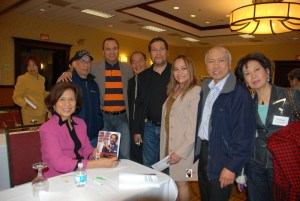 Bikolana Filipino American Attorney Loida Nicolas Lewis (seated) holds the book, “Why Should White Guys Have All The Fun?,” a bio epic of her husband, Attorney Reginald Lewis, shortly after accepting last Friday, April 12, an invitation from Ms. Evelyn de la Rosa Tolledo (third from right), president of the Bikol U.S.A. of the Midwest, to be the guest of honor and speaker at the national convention of the Bikol National Associations of America (BNAA) on July 25-27, 2014 in Chicagoland. Attorney Lewis was the featured speaker at the  “Billionaire’s Expo” at the Holiday Inn & Suites at 150 S. Gary Avenue in Carol Stream, Illinois sponsored by IPJM in cooperation with twice-monthly Fil-Am MegaScene, published and edited by Bart & Yoly Tubalinal of nearby Buffalo Grove, Illinois. The other guests at the event were Bishop Abraham Gaor, founder, “School of Wealth & Success,” and Pastor Armand Cudia, author of Shepherds Into Kings, Ms. Irene Alano-Rhodes of “Miss Saigon,” West End Theater, London and Dany Juat of “Papuri” singing group and IPJM Band. Ms. Lewis also spoke about current events in the Philippines. Looking on from left are officers and members of the Bikol U.S.A. of the Midwest, Danilo Auro, Tony Blando, Romy Sarcilla, Bob Tolledo, Joseph G. Lariosa and Luz Nunez. (FAXX/jGLi Photo)

Filipino American Attorney Loida Nicolas Lewis (standing), co-leader of the U.S. Pinoys For Good Governance, gives brief remarks, where she endorsed to 900,000 registered Filipino overseas voters to vote for at least eight of the 12 Team PNoy senatorial candidates to give President Noynoy Aquino a majority in the Philippine senate for the next three year. But she clarified the endorsement should “not let [President Aquino become] a dictator but only to get things done properly.” Looking at left is Judge Jessica O’Brien (left), the first Filipino American elected Cook County Circuit judge, and Ms. Yoly T. Tubalinal, co-publisher/editor of Fil Am Megascene, a twice-monthly publication in Chicagoland. At left are participants to a community event that include Jun Delfin, Tony Blando, Bob Tolledo, Bart SG. Tubalinal, Thelma Fuentes, Evelyn Natividad and Luz Nunez. (FAXX/jGLi Photo by Joseph G. Lariosa)