Home › Fundraising › Being One For A Good Cause

Being One For A Good Cause

To help victims of natural catastrophes is a good cause for all people to be one. The havoc wrought to the Filipino people by the imbricating storms within a few days was unprecedented and had caused countless sufferings and pandemonium state of affairs: floods and landslides, displaced families and communities, homelessness and hunger, drowned and bedraggled people, missing family members and ubiquitous material destruction.

You may find it relatively easy and simple to enumerate things like these after each disaster. And if you’re being meticulous enough you might end up with a complete statistics of destruction. It is exactly at this point that we have to exercise caution because there is where we tend to categorize such report as just any ordinary media news because statistics of destruction, when they’re too high at one time, has the effect of detaching our most personal feelings with the result that we do not react- except when our own relatives are affected. The reason is that such huge numbers simply fall into a faceless, anonymous suffering crowd. In contrast, a media coverage of a single missing girl or boy whose face and background story we read everywhere, becoming talk of the town or of the whole world or of the internet for weeks or months, we tend to sympathize personally with the victim, hence we react in any form whatsoever.

This is where the usefulness of such organized rescuers, humanitarian aid and charity organizations  come into play for through their initiative, extensive networks and expertise they move people to be one for a good cause by giving us that lost face of collective suffering, of statistical anonymity.

Words will not be enough to express our respect and gratitude to these workers and organizations as well as private individuals of all races who came to help. But for now, let’s just say that the whole Philippine nation is deeply thankful and proud of you all!

For us Filipinos in Switzerland, we also wish that our very own country the Philippines be proud of us. For this reason we have also organized various forms of help including this Classical Concert to help these organizations- for us in particular the Swiss Chamber Of Commerce Taskforce Asia- to carry out their tasks on the front line. We hope to be able to make a difference, no matter how small it may be, for we do not only see the good cause but the need for charity.

Hence, let this need for charity of our distressed people reminds us all here in Switzerland of our need for unity, of being one anytime for a good cause- without pre-conditions and keeping in mind the inviolable dignity of each Filipino victim. We should not forget where we come from at the same time being aware of the unparalleled humanitarian tradition of our second home Switzerland, home to the Red Cross, Swiss Humanitarian Aid, Glückskette or Swiss Solidarity and many other charity organizations which have once again came to the rescue of our inundations and landslides victims and helped alleviate their sufferings.

In this spirit, we shall all agree that a kind and compassionate act is often its own reward. /

November 10- The Fundraising Trip To Berne

The Philippine Embassy in Berne, Switzerland.

Our trip to Berne last Tuesday, 10th of November, was part of our mission for the typhoons’ victims in the Philippines.

My impression: A dynamic woman, friendly and accommodating, yet focussed and straightforward. After a short briefing by Consul Margarita S. Ibayan as to the rules of the meeting, the ambassador let each one us introduce her/himself  with emphasis on each one’s  respective professional experience.  After her short mission statement and definition of terms, she moderated with ease the lively group discussion that ensued between the participants, as each one  began fobbing off  one’s own ideas on the rest. I could sense her experience in arbitration as a lawyer getting applied here as the discussion got emotionally intense and going astray as she jumped in in those critical moments to keep the course of the discussion. 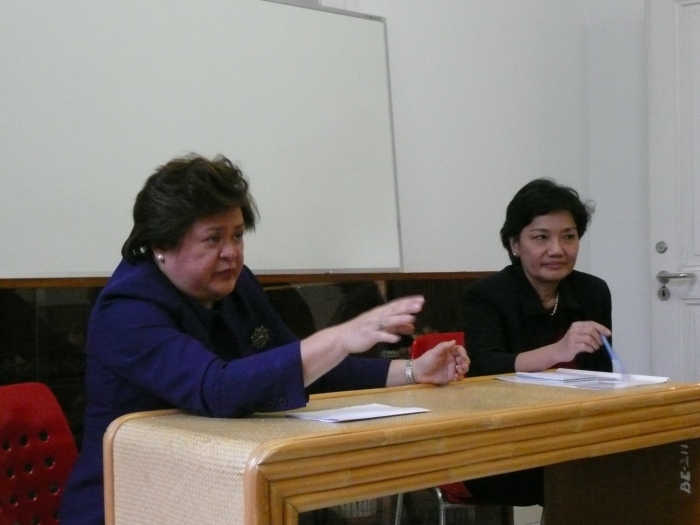 She listens intently though before raising a point. On the right is the First Secretary and Consul Margarita S. Ibayan, keeping the overview, listening to each argument and picking up non-verbal messages.

Actually, we have agreed  not to publicize yet all the results of what we have discussed in this meeting-

except for the upcoming  fundraising projects where Bulan Observer is one of the organizers.

In any case we were able to present our cause and we were met with open ears and benevolent hearts: SUPPORT is promised.

By the way, the ambassador is one of the founders of this Taskforce Asia that helped raise huge sum of money for the Ondoy relief.

Now, it’s our turn to distribute flyers and tickets of our Concert project to the group of Filipina leaders.

For us, we were over the moon as tickets were sold. For the rest, a smile,  and for some who scored less,  a hope of getting more by the next meeting.

The final group photo after a lively discussion. More meetings in the consulate are scheduled.

For our part, I should say we have achieved our day’s mission.

now personally distributing plates for the prepared snacks to the participants of the meeting.

Back in Zürich, we have been receiving good feedbacks from many people and sponsors since the past few days.

Indeed, a kind act is often its own reward.