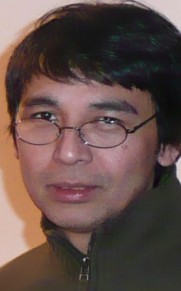 Just a few days before the end of 2010, a sister of mine asked me why I did not respond to her Facebook invitation. I told her I’m not a Facebook fan and that blogging is more interesting and is more than enough to consume the remaining time of my otherwise very busy life. “But you’ve  got a Facebook account that I discovered and with your Bulan Observer photo on it!”, my sister exclaimed.
“No, I don’t have one” I repeated and thought she was just joking.
To prove her point, she opened her Facebook and there I saw it crystal clear –  the Facebook supposed to be mine!

Dear friends, that Facebook account bearing my photo is not mine and has nothing to do with me.

It is, I think, a work of a lost soul who has no face of its own to attach to its own Facebook; a person who has not the courage to discuss with me in Bulan Observer the corruption issues that hurt him.

We have discussed this in the past that a man without a valid and decent argument to present resorts to such primitive form of language – and I pity such a primitive and faceless being who roams around the net without a concept of civilization.

Again, as a netizen my home is Bulan Observer and nowhere else.

Thank you and have a fruitful and blessed 2011.