Or: When The Servant Is Noblier Than The Master

The article War At Home written by Chip Tsao -where he arrogantly ridiculed his Filipina maid and the whole of the Philippines as a nation of servants -seems to me rather a war inside Chip Tsao after losing the Chip that’s holding his brain together. His case must have been a post-traumatic decompensation to the Mao- indoctrination he underwent, a kind of what the Germans call Dachschaden- a Rooftop (cranium) damage. For his otherwise literary-schooled brain became fragmented like the Spratley Islets he has claimed to be rightfully belonging to China, the master, and not to the Philippines, the servants. Well for sure, I yield to the fact that his fragmented Spratley brain belongs to his China, not to my Philippines. But I do not yield to his arrogant attitude to the Filipino people.

Before I go on, I have to make it clear that this is my personal response directed to the person of Chip Tsao alone in reference to his insulting remarks to his Filipina maid Louisa and to my nation the Philippines.
They said Tsao has written a number of satirical books- books I will surely not want to see-, came from a family of writers, studied English literature, worked for BBC and for diverse newspapers and magazines in Hong kong. All these, even far from being a Nobel candidate, are achievements that attest to intelligence and sanity before March 27, 2009, for from this date on he attested to us quite sarcastically that he no longer can hide the mental derangement that has been dissolving him inwardly- most of all his brain and common sense. He lost his professionalism, his Asian cultural sensitivity- and soon his Filipina maid and the sales of his books.

Symptomatic of decompensation is a diminished ability to think including loss of long and short term of memory.
Chip Tsao admits that “We can live with Lenin and Stalin for they were once the ideological mentors of all Chinese people” and that “The Japanese That’s no big problem-we Hong Kong Chinese love Japanese cartoons, Hello Kitty, and shopping in Shinjuku, let alone our round-the-clock obsession with karaoke”. This is a proof of Tsao’s remaining memory content- which is nevertheless a shallow one, already symptomatic of progressive mental deterioration and regression to infantile developmental stage as shown in his fascination with Japanese cartoons.

Actually, these are all his personal problems and these should bother him alone, not us. What bothered me was where in the world did he derive his justification to viciously ridicule and belittle before the world the Philippines and the Filipina maid working in his household? The problems of one country should not be used by any outsider for insulting honestly and peacefully working Filipinos in Hong Kong and the rest of the world. Chip Tsao is sick; his distorted face seems to reveal to us a long history of pains from feats of convulsions and epileptic seizures, or of a man drowned in alcohol day-in and day out, or of a man’s face adopting itself to the cartoon figures he is watching everyday. 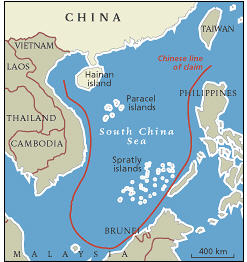 The Philippines’ claim of some islands, notably the Kalayaan Island Group,  of the Spratley Islands, is not just a product of whims and fancies of the Philippines for it has a long standing historical and legal ground. And as a matter of fact, the Philippines is about to present her Philippine Archipelagic Baseline  Law on May 13, 2009 to the United Nations Convention on the Law of the Sea (UNCLOS).

This was probably the latest news that triggered the convulsions and distorted Chip Tsao’s face – and intellect. Now he lost quite a big deal in his life: Aside from being declared by the Philippines as persona non grata, for sure the Filipinos will boycott his books and anything about him aside from attacking him in Internet- and probably in the streets of Hong Kong. The Internet has been boiling from heated attacks by Filipinos against Chip Tsao since end of March and this will go on, enough for Tsao and his relatives to read for a lifetime- and even beyond that. Many families in Hong Kong with Filipina maids will hate Chip Tsao for now they are no longer sure about the noodle soups being served them and about the security of their children when they (the parents) are working. Not that the Filipinas would go amok for it’s not in their nature, but the minds of these Hong Kong parents have been polluted, made paranoid by Tsao’s unpatriotic misdemeanor.

Louisa should take Tsao on a wheelchair and walk with him into the deeper regions of Chinese history after his meditation on Mao’s teachings or after he has watched his favorite face- distorting Japanese cartoons or doing his round-the-clock obsession with karaoke (round the clock? lack of sleep causes amnesia).

Anyway, here are other facts not mentioned by Chip Tsao of why he can forgive Lenin, Stalin, Mao and love the Japanese:

1. Lenin and his Bolsheviks  murdered around 4 million people – men, women and children – by mass executions, death camps, and state-caused famine.

2. Stalin and his Regime slaughtered around 20,000,000 people in USSR.
3. The Chinese Mao was not a lesser criminal for Mao Zedong’s  regime butchered around 40,ooo,ooo Chinese, probably including Chip Tsao’s ancestors.
And how about Chip Tsao’s fascination of Japan that makes him forgiving when he writes,  “The Japanese planted a flag on Diàoyú Island. That’s no big problem”.
No big problem? How about this fact he forgot to mention:
1. The Nanking Massacre, 13 Dec. 1937-Feb. 38, when the Japanese butchered around 400,000 Chinese. If  Tsao loves and used photography as an investigative journalist, here are some photos  for him of this Nanking Massacre.  My warning: He should visit this site only if he  has the gut for these are very face-distorting photos. The same with this video:
No Dogs, No Chinese- A myth or reality? I have never seen such a signboard and I would never like it if this indeed happened. To my martial arts  idol  Bruce Lee,  it looks like this was a reality. If it were, then at least he was aware of it and protested against it directly and honestly:
Quite earlier than that, in 1882, the U.S. Congress passed  the Chinese Exclusion Act, an immigration law which excluded Chinese labor from entering the United States.
In April 28, 1888, our Dr. José Rizal was in the US – six years  after the Chinese Exclusion Act of 1882 was passed.  He wrote a letter to his parents in the Philippines after his bad experience in America because of this Chinese Exclusion Act:

“Here [in San Francisco] we are in sight of America since yesterday without being able to disembark, placed in quarantine on account of the 642 Chinese that we have on board coming from HongKong where they say smallpox prevails. But the true reason is that, as America is against Chinese immigration, and now they are campaigning for the elections, the government, in order to get the vote of the people, must appear to be strict with the Chinese, and we suffer. On board there is not one sick person.”

It should be clear by now to Chip Tsao that he missed the lessons of history and failed to notice that the Philippines is not to be found in the list of nations that butchered tens of millions of their own people or other people; it should be clear to Chip Tsao by now that his success in Hong Kong did not really offer him the answer to his search for identity and the right therapy for his feelings of inferiority. Inwardly Chip Tsao is torn between worlds: he wants to be a Chinese but he doesn’t trust his own people, he loves the European nobility but he looks Chinese. Unlike Bruce Lee, he cannot express himself honestly. His article War At Home is double- edged: he attacked his society and his own people by way of attacking the Filipinos. The communist indoctrination has made the Chinese suspicious about each other. A Chinese would rather trust a  foreigner than a Chinese he doesn’t know. This is simply the result of oppressive totalitarianism, not really of an inherent Chinese character. It would take time to overcome this. We understand now how Tsao is divided within himself- at one point he is inside the Great Walls Of China, at another point he is outside of it. This pains his Dasein terribly.

Chip Tsao was said to have made a public apology for this article War At Home. I do not accept such insincere behaviour after callously making fun of the Philippines’ position on the Spratley issue by way of insulting Louisa and the rest of the OFW who are serving the world and their own families back home. Chip Tsao also insulted the Chinese-Filipinos  in the Philippines for many of  them are also workers at home and abroad, servants of lesser degree as Chip Tsao declared, not worthy of self-assertion. Indeed, Tsao is missing his  Chip since March 27.

The Russians sank a HongKong freighter last month, killing the seven Chinese seamen on board. We can live with that-Lenin and Stalin were once the ideological mentors of all Chinese people. The Japanese planted a flag on Diàoyú Island. That’s no big problem-we Hong Kong Chinese love Japanese cartoons, Hello Kitty, and shopping in Shinjuku, let alone our round-the-clock obsession with karaoke.

But hold on-even the Filipinos? Manila has just claimed sovereignty over the scattered rocks in the South China Sea called the SpratlyIslands, complete with a blatant threat from its congress to send gunboats to the South China Sea to defend the islands from China if necessary. This is beyond reproach. The reason: there are more than 130,000 Filipina maids working as $3,580-a-month cheap labor in Hong Kong. As a nation of servants, you don’t flex your muscles at your master, from whom you earn most of your bread and butter.

As a patriotic Chinese man, the news has made my blood boil. I summoned Louisa, my domestic assistant who holds a degree in international politics from the University of Manila, hung a map on the wall, and gave her a harsh lecture. I sternly warned her that if she wants her wages increased next year, she had better tell every one of her compatriots in Statue Square on Sunday that the entirety of the Spratly Islands belongs to China.

Grimly, I told her that if war breaks out between the Philippines and China, I would have to end her employment and send her straight home, because I would not risk the crime of treason for sponsoring an enemy of the state by paying her to wash my toilet and clean my windows 16 hours a day. With that money, she would pay taxes to her government, and they would fund a navy to invade our motherland and deeply hurt my feelings.

Oh yes. The government of the Philippines would certainly be wrong if they think we Chinese are prepared to swallow their insult and sit back and lose a Falkland Islands War in the Far East. They may have Barack Obama and the hawkish American military behind them, but we have a hostage in each of our homes in the Mid-Levels or higher. Some of my friends told me they have already declared a state of emergency at home. Their maids have been made to shout “China, Madam/Sir” loudly whenever they hear the word “Spratly.” They say the indoctrination is working as wonderfully as when we used to shout, “Long live Chairman Mao!” at the sight of a portrait of our Great Leader during the Cultural Revolution. I’m not sure if that’s going a bit too far, at least for the time being.