Home › Arts › The Benefit Concert Was A Cultural Success

The Benefit Concert Was A Cultural Success

The piano concert last Thursday, December 10, was a success in as much as it has shown the cultured face of the Filipinos here in Europe. It was therefore much of a cultural success, less of a financial one due to a relatively short time to advertise it in a big scale to reach out more people and one more, December is just a busy month for many people here in Zürich. We were actually advised by the Swiss-Asia Chamber Of Commerce to postpone it for next year but the Filipino organizers, namely Mila Asuncion with me, and Franklin Patricio with Elizabeth- and above all our virtuoso pianist Aries Cases- decided to keep the schedule and just focussed our attention on the aspect of quality than quantity. Little amount, but sincere support- and most of all excellent music!

And we were right because more often it is quality that speaks around. The many medical doctors  and some friends who sponsored the event , the other medical personnel of the Hirslanden Clinic and  all the other guests – both Swiss and Filipinos- who appreciate classical music were all fascinated and went home with good stories to tell that Thursday evening. With it,  we have laid down also the foundation for future concert planning with Aries Cases and with other excellent Filipino artists who reside in Europe.

The Ondoy victims would surely understand us if we cannot send that much alone from this concert’s financial turn-over. But to put things in proper perspective again, this concert was actually our expression of deep sense of gratitude primarily to the Hirslanden Clinic for donating a bigger amount to the Ondoy victims last October after we have approached them wherein the clinic director Daniel Liedtke and the communication officer  Andrea Helm- Jochan, after a thorough examination of our case, had promised us the needed help not only financially but also in creating awareness of the problem among the clinic personnel by means of internal publication.

However, we will pursue next year with our own  humanitarian projects in the Philippines on our own efforts, planned projects that preceded the typhoons last October. It takes time naturally to organize such fund-generating activities taking into account that we are all busy also with our own work, families, etc.

I will attempt to make a review of the musical part of that evening in a separate article and hope to be able to bring  justice than damage to Aries Cace’s superb musical performance.

Some photos  taken before the storm, – before that stormy Beethoven’s Sonata No. 23 in F minor.

Aries is enjoying the evening before the concert. The next day, December 10, he was already absorbed in his material,

as he practised by himself a few hours before the concert. 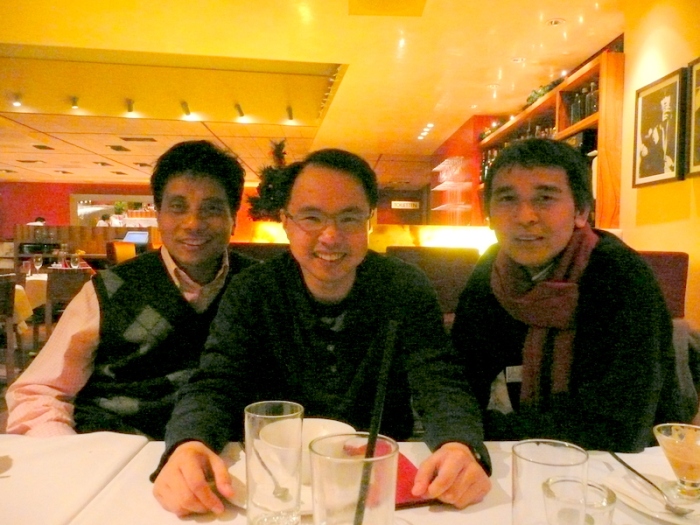 Franklin, Aries and Jun. A nice evening and good discussions

about the Chinese pianist Lang-Lang, music and the arts and life in the Philippines.

Enjoying the basic chordal harmony of the evening.

The presentation and Concert Evening

she talked about her experience of the devastating Dante storm

last May that hit the town of Bulan. 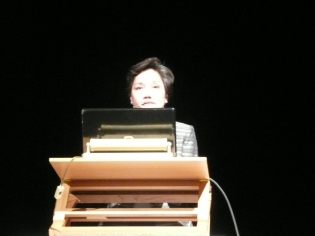 Consul Margarita S. Ibayan delivering her message as she acknowledges 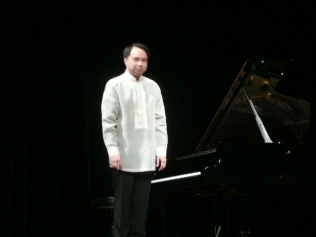 that furious leaps and bounds of the Mephisto Waltz.

a song which brought

and at times dreamy classical pieces. 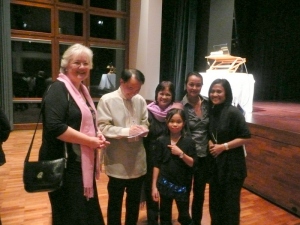 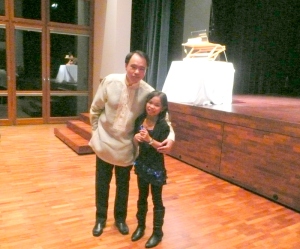 About the pianist and conductor Aries Cases

Vienna based pianist Aries Caces is one of the most versatile Filipino concert pianists. Aside from being a chamber musician and repetiteur, he is also a conductor. The late Manila critic Vilma Santiago-Felipe described him as “another gem in the Philippine music scene.” At the age of seven, he enrolled at the University of Santo Tomas (UST) Conservatory of Music as a personal scholar of Prof. Feliza Custodio. From 1980 to 1985, he attended the Philippine High School for the Arts and the UST Conservatory of Music under the tutelage of Prof. Ernestina Crisologo and Prof. Bernardino Custodio. In 1982 he won First Prize in the National Music Competitions for Young Artists (Piano Category). Two years later, he was runner – up in the Manila Symphony Orchestra Concerto Competitions. Caces came to Graz, Austria in 1985 upon the invitation and arrangement of then Austrian Ambassador to the Philippines, Dr. Friedrich Posch. He studied with Prof. Walter Kamper at the Hochschule für Musik und darstellende Kunst in Graz. From 1986 to 1993, he was under the tutelage of world-renowned pianist Prof. Paul Badura-Skoda at the Hochschule für Musik und darstellende Kunst in Vienna. He finished his “Diplom” in 1989 and obtained his Master’s Degree (Magister Artium) in Piano Performance in 1994 under Prof. Roland Keller. He also studied Piano Chamber Music with Prof. Georg Ebert. In 1999, he finished his “Diplom” in Conducting at the Hochschule für Musik in Vienna under the tutelage of Prof. Uros Lajovic. Caces has performed several solo recitals and various concerts in the Philippines, Austria, Canada, Czech Republic, France, Germany, Spain, Switzerland, and the U.S.A. In 1989, he was soloist of the Hochschulsymphonieorchester in a concert performed at the Golden Hall of the Musikverein in Vienna. He was awarded the “Prix Decouverte” during the Festival International de Musique in Le Touquet, France in 1991. He has also played as soloist of the Philippine Philharmonic Orchestra, UST Symphony Orchestra and the Hannover Kammersymphonieorchester. In 2001, he was a featured soloist of the Philippine Philharmonic Orchestra during its first European tour. He was a recipient of several scholarships, including the Makiling Academy and Research Institute for the Arts (MARIA), UST Conservatory of Music Alumni Association, Music Promotion Foundation of the Philippines, Cultural Center of the Philippines Young Artist’s Fund and the Austrian Federal Ministry of Science and Research. — 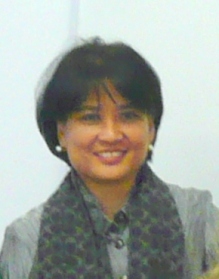 The global warming is the greatest contributory factor that created major climate problems also in our country, the Philippines.

The continues change of temperatures and weather conditions are signs that the Mother Earth has began to suffer.

Therefore, every individual is responsible to focus awareness and consciousness to this problem and help in each own way save the planet Earth from total destruction, or the Philippine archipelago from sinking in the Pacific ocean. So, let us unite to fight for a good cause for the sake of our children and their childrens’ children.

Speaking about my personal experience last May 2009,

in Bicol region in the town of Bulan which is located at the southern part of Luzon, this is the „epicenter“ of typhoons the whole year-round.

So people were almost all the time ready: They have rubber boats, bankas or just about any object that floats for them to survive! The typhoon was raging the whole time in the region.

To our surprise, it came to a point that over night water came up to 10 feet high. In high flooded areas, people were gasping for breath, holding on a rope tied in both ends to save themselves, with water coming up to their neck, fighting not to sink in deep mire where there’s no longer a solid place to stand. I have seen how the flood waters carried them away.

Words cannot express what I felt and seen that very moment but these pictures speak more than words.

It was unbelievable and I was caught unaware when we went to the school building where the evacuees were waiting for reliefs.

I just can`t help and I felt as if an apple got stuck in my throat, as I tried my best to be brave and not to cry, but at the end I bursted into tears. I was shocked!

The shivering children with their innocent looks, hungry, anxious and thirsty that the whole night till we found them the next morning as the storm continued pounding the town without mercy with with torrential rains and gusty winds.

No beds, no warm blankets, but in as much that they wanted to have comfort and security, there is this problem of poverty which is making their situation even more miserable.

We came to their rescue ; me, my husband as well as other relatives around. Indeed, we suddenly found our selves in the midst of Humanitarian Action:

Hot drinks, juices and simple food at that instant moment were served and using our personal belongings to dry them.

The children dared to smile while waiting for their turn when they were served with their foods and drinks.

In Bulan, a town in southern Luzon, we went before this storm to a small barrio called Santa Remedios to visit the Sta. Remedios Charity Clinic, a small but cozy place built by a single woman’s compasion for the sick, the helpless and the vulnerable.This woman is a Filipina nurse working in the United States of America whose name is Angelita de Guzman Kowalevsky.

This caught my eyes and heart, and I would like to say that this woman, though I have never met her yet personally, is one of the Florence Nightingales in our country.

These pictures were taken the day before the storm.

Unfortunately, this was submerged during the devastating storm.

And this is what Angelita said:

„I had been supporting this clinic for four years now. I need your help desperately. Please save one more life. Let us all continue this humanitarian services“.

These became the root and cause of why we are here tonight but this problem that we are facing every time is really very awful.

Billions of pesos were lost in properties and harvests as well as hundreds of lives- an experience that will be transmitted from generation to generation because this was one of the worst catastrophes in Philippine history.

With our heartfelt gratitude, we welcome you all tonight with the presence of our First Secretary and Consul Margarita S. Ibayan of the Philippine Embassy in Bern.

We wish you all a pleasant musical evening.   /