Genealogy of the Asuncion

These documents were sent to me by various cousins. It took me a long time to release them because of technical problems. Now that they’re out, I hope that these will inspire the young Asuncions of today and move the older ones in possession of some relevant documents to share them to these younger ones. jun asuncion 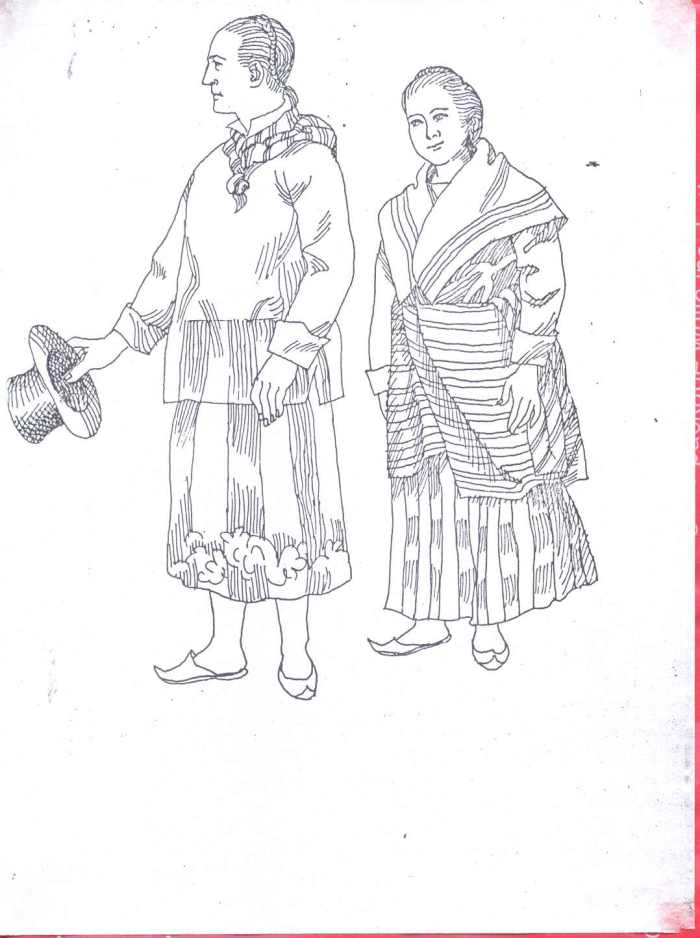 A family that recognizes the remote origin of spouses

In Memory of Mariano Asumpcion

Of these spouses, we were able to preserve their photo drawn only in crayon by one of their children who was a celebrated painter in the mid 1900’s. He was Don Justiniano better known as Capitan Ting. The photo measures nearly one foot high, and for the first time was reproduced and published in the No. 4 Vol. 1 of the Revista Historia de Filipinas (page 60). The frontal sketch of this remembrance is a reproduction of the same by Corazon, the third grandchild of the photographed.

We do not have personal details of the family’s parents. We only know that they were principal neighbors of the town of Santa Cruz in Manila. It is possible that Captain Ting who was naturally artistic in detailing and untiringly compiling data, wrote memorable events about his parents, but his writings could have gotten lost or destroyed during the revolution, or acquired

by some members of the family that we now ignore. To him we owe the list of succession of Governors that went to the union of “meztizos” in the town of Santa Cruz, Manila. Since its foundation in the year 1741 until 1889, the list became public in the No. 4 and 5 of the Revista Historica de Filipinas.

In this list ( of which the original has disappeared ) we found out that this great head of the family, Mariano Asuncion Cagalitan, was Governor in the year 1805. And because the author of the list was also one of them, it now appears an opportunity to enclose what he refers as follows: “Justiniano Asuncion took possession on the 25th of January, 1853 and was revealed on the 27th of June,1854, opened the second street of San Lazaro, now, Oroquieta Street, in the entrance of General Novaliches.” As it is seen in the said list, it has found more notable inserted events that took place during the term of the Governor.

2. ANTONIO ROXAS ASUMPCION – Born the 10th of May, 1794, Saturday at 2:00 p.m. and was baptized on the 15th day of May by Bro. D. Buenaventura Ubaldo. His godfather was the Head Priest and Secretary of the Archbishop of Manila, Br. D. Raymundo Roxas.

3. VICTORIA PAZ ASUMPCION – Born the 23rd of December, 1796, Wednesday 6:00 p.m. and was baptized the 25th of December by the Priest, Br. D Ramundo Roxas. Her godmother was Dona Josefa Bogan.

8. AMBROSIO ASUMPCION – Born the 7th of December, 1808, Wednesday at 11:00 a.m. and was baptized the next day by Bro. D. Menandro Obispo. His godparents were D. Manuel Bonifacio Pitex and Dona Maria Eloriaga.

10. LEONCIO ASUMPCION – Born the 12th of September, 1813, Sunday, at 7:00 p.m. and baptized by Br. Raymundo Roxas. His godfather was Br. D. Juan Nepumoceno Mijares priest of the town of Binondo.

11. JUSTINIANO ASUMPCION – Born on the 26th of September, 1816, Thursday, at 8:04 p.m. and was baptized by Bro. D. Ramon Pineda. His godfather was D. Benito de los Reyes and for confirmation by his own brother, D. Epifanio Asumpcion.

D. Mariano had as a cradle, the town of Santa Cruz, Manila, which was also the same for all his children, where he lived for the rest of his life. He was born from a modest family. His complexion was white and his nose was pointed like his mother of Latin blood who came from a family that was traditionally Portuguese or half Portuguese. A bit more noticeable on the picture was the observer’s being notorious for remembering faces. His Caucasian origin of which he appears, is coordinately in contrast to his attire and the pigtail that he carries on his well formed head. This pigtail, according to D. Jose Ma. Asuncion great grandchild of the person we refer here as the biographer, ” was of importance in these towns where French fashion was in vogue and therefore had to be a prototype of elegance and good taste” (Revista Historica de Filipinos page 61, No. 4 Vol.1). We also believe that its use was made influenced by our neighbor, Imperial China.

We know nothing of the level of instruction, undoubtably, it was most instructed in its local ambiance.

His wife, Dona Maria, was the only one with whom he united his fortune. She was the niece of Dr. Molo, father of Captain Paterno Molo, ascendants of those that now constitute the distinguished family of the Paternos of this city. She was a mestiza by blood and was very fond of her children. She outlived her husband by 15 years, of which he passed away when the one who was to be Captain Ting was only 12 years old, according to the daughter of the latter, and also as told by the same. This daughter, Doña Benita has already surpassed her 71st year dedicated to the_________________of virtue.

(Note: The foregoing is the English translation of a friend of Ms Lourdes (Nelly) I. Jhocson, daughter of Consuelo Asuncion and Dr. Gabriel Intengan, of the original Spanish text writen by Macario Carrillo, husband of Guia Asuncion. The blank space in the last sentence of the account referred to an apparently illegible word. On closer scrutiny in a computer scan, the word appears to me as “rezo” which in English means prayer. The Spanish text would therefore read as “… sus 71 anos dedicados al rezo y a la virtud.”. In English, ‘…her 71 years dedicated to prayer and to virtue.”. (Eduardo C. R ojas, Jr. ) 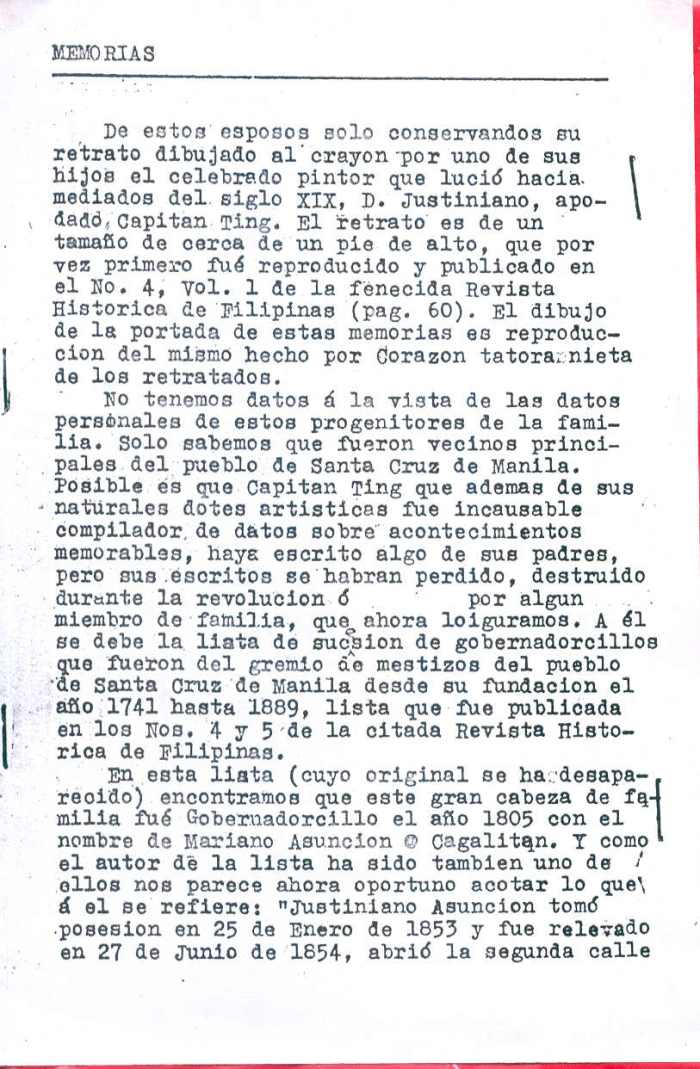 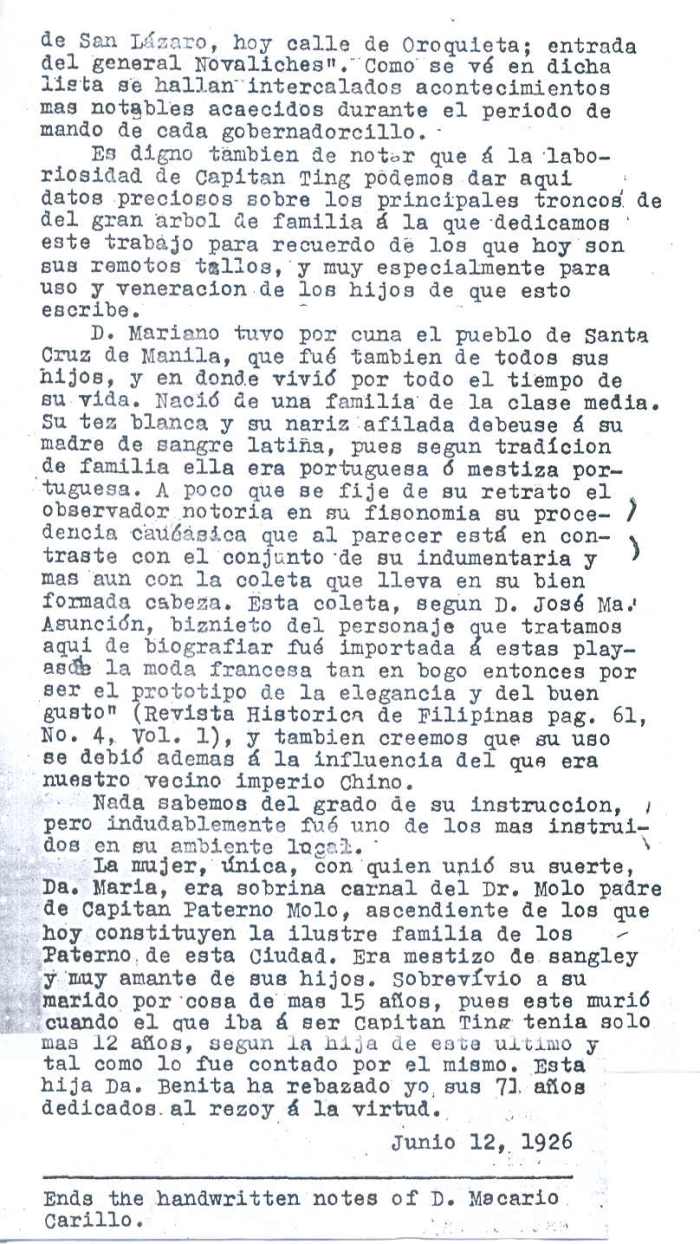 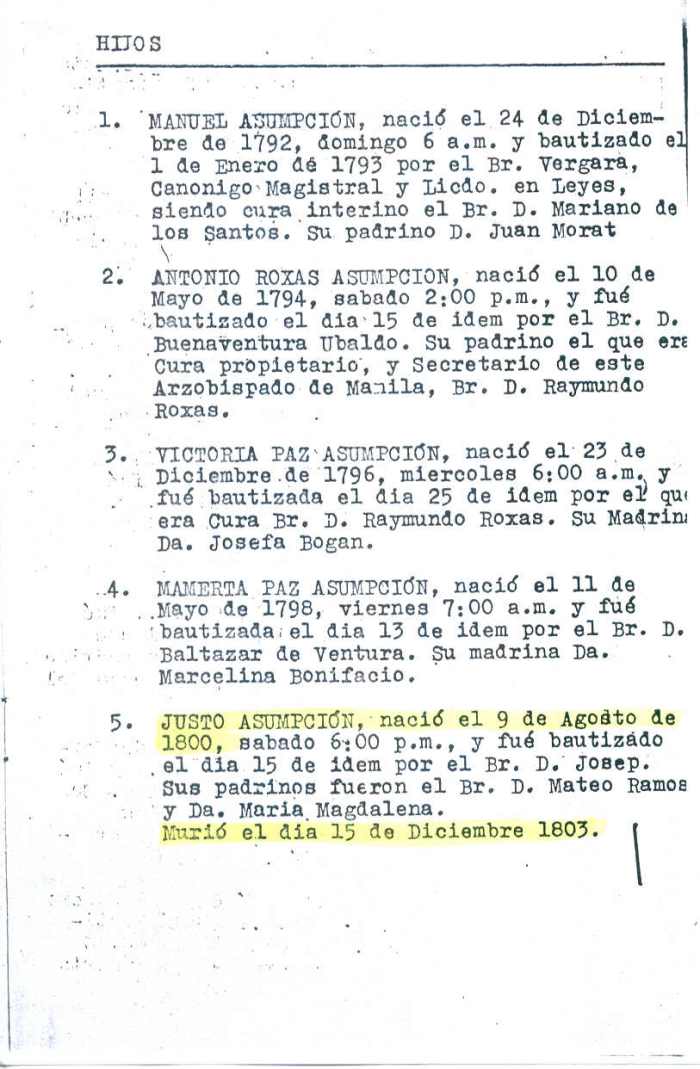 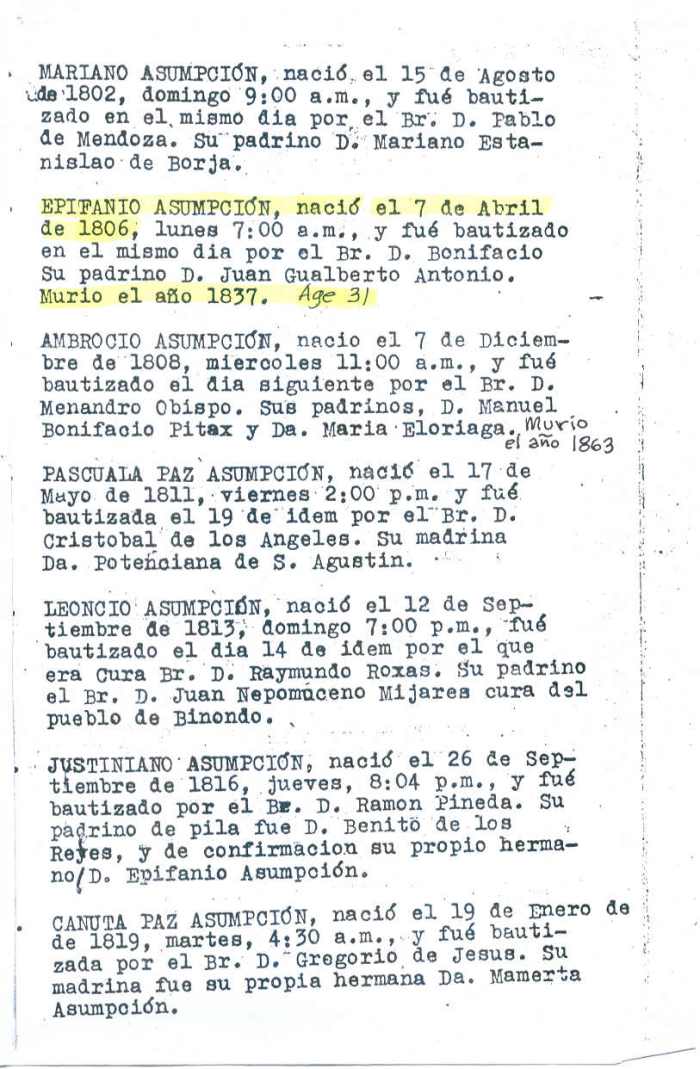