BULAN, Sorsogon, Philippines (JGL) – In 1943, the Japanese Imperial Army started building an airport in a small sitio of Bulan, Sorsogon so their soldiers can easily escape if General MacArthur were to return with his Allied soldiers during World War II.

But because of the extraordinary grit and resiliency of the Filipino guerillas (militias), they were able advance the timetable of MacArthur’s return, which caught the Japanese by surprise.

As MacArthur was carpet-bombing Leyte from the nearby Leyte Gulf, the Japanese Forces abandoned the airport they were building in what is now believed to be sitio Oyango in Bulan that ends up in Ticao Pass, a part of the Luzon Strait that connects the Philippine Sea to the South China Sea (Philippine Western Sea) in the western Pacific Ocean. 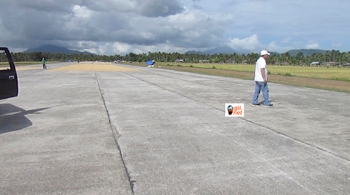 (LOLO BOBBY M. Reyes (right) surveys the extend of the runway of the Bulan Airport, which he said he will complete if he were elected Sorsogon governor on Monday, May 9, during his visit to the area recently in Bulan, Sorsogon, Philippines. (JGL Photo by Joseph G. Lariosa)

Several Philippine presidents since Liberation had dreams of reviving the construction of the airport but an independent candidate for provincial governor LOLO Bobby M. Reyes would like to finally help the people of Bulan (Bulanenos) have their own airport if he is elected governor on Monday, May 9, 2016. Government officials who tried to build the airport just put the money for the airport in their pockets that’s why nothing had come out of the airport, Mr. Reyes said.

Mr. Reyes said he could make the Bulan Airport a reality if his patron, Sen. Grace Poe, is elected president on Monday.

Mr. Reyes, who celebrated his 70th birthday last May 1, said the completion of the Bulan International Airport (BIA) is going to be one of the flag-ship projects of his administration out of the ten priority projects to “reinvent” the Quality of Life in Sorsogon and its “Isles of the Future” and create 300,000 jobs.

TAKING A PAGE FROM FRIVALDO

Taking a page from Sorsogon’s longest-serving governor, the late Juan G. Frivaldo, who sported the name “Tata (elderly) Juan,” Mr. Reyes said his moniker “LOLO,” which means grandfather in Bikol, stands for “Law and Order, Less Government and Opportunities equally for all.”

As a long-time Balikbayan from Los Angeles, California, where he was a lifelong community activist, LOLO Bobby returned to his boyhood and high school-age home of Barangay Bibingcahan in what he now calls “Bacon-Sorsogon (Bac-Sor) City” with all the wisdom and perspectives he accumulated so that he could pay back his dues to his  province of birth.

Based on his writings from his travels on his own mabuhayradio.com and Facebook posts, LOLO Bobby now wants to put those ideas into practice if he luckily wins the majority vote of the 425,025 Sorsogon voters, who had an 83.71% voting turnout record in 2013.

Bobby decided to run for governor of Sorsogon when he started to urge Senator Poe to run for president, when nobody did, thru his Facebook posts, which generated tens of thousands of likes and followers and when nobody from the crop of candidates for governor in Sorsogon supported Ms. Poe. Bobby was introduced to Ms. Poe by his daughter, who was a classmate of Ms. Poe from grade one in Antipolo City to high school.

Because Bobby is not allowed to host a radio program a few weeks in the run-up of the elections, he asked some of his friends, including this reporter and Bubot Laguna, to sub for him in spreading his message over Catholic radio station (DZGN-FM, 102.3mHz)(11a.m. to 12 noon) hosted by Psalm Geraldino and PADABA (103.9 FM) (4 p.m.-6 p.m.) hosted by Bhem Emmanuel Desabayla.

( In his visit to Purok 7-B in Bulan Airport with this reporter, LOLO Bobby told the people, who turned the 10-lane runaway of the airport into palay drying platform, that with the grace of God if he were elected Sorsogon governor, he foresees the airport to be his flag-ship project that could generate hundreds, if not thousands, of jobs.) 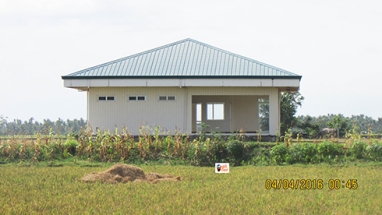 (ASIDE FROM THIS Terminal building, only the 10-lane runaway is the only visible task that was constructed from an alleged release of P15-M (US$333,333) to construct the airport in 2007. (JGL Photo by Joseph G. Lariosa)

It was reported by the Bulan Observer that sometime in 2007, there was funding for the airport in the amount of P15-M (US$333,333) for the parcellary survey, to complete the runway upgrading and right-of-way acquisition that was supposed to be completed by 2008. It did not mention if the terminal building that is the only visible building in the airport was part of the funding.

(HIS EXPANSIVE runway that was started by Japanese Imperial Forces was being rebuilt by every administration after World War II but has yet to be completed. LOLO Bobby M. Reyes, a son of a native of Bulan, Sorsogon in the Philippines, wants to finish this Bulan International Airport if he is elected Sorsogon governor on Monday, May 9. The runway ends in Ticao Pass, a part of the Luzon Strait that connects the Philippine Sea to the South China Sea (Philippine Western Sea) in the western Pacific Ocean. (JGL Photo by Joseph G. Lariosa)

Aside from the airport and the other priority projects he wants to pursue, Mr. Reyes said he wants to introduce economic development in Sorsogon because it is one of the 20 poorest provinces in the Philippines. “It’s about time somebody has to do positive things for the province and of course I want zero corruption. I would handle peace and order under a law and order program that will stop corruption and stop crimes from rising, especially drug epidemic.”

Although nobody is bankrolling his campaign, LOLO Bobby likes his chances to be elected governor as he has been rated fourth among the eight gubernatorial candidates by a Sorsogon radio station. 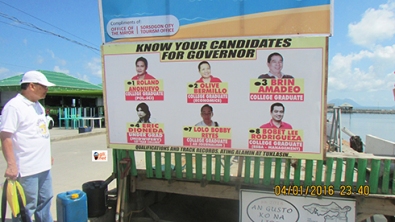 (BECAUSE HE has no money to pay for his own billboard, Independent candidate LOLO Bobby M. Reyes is very pleased to see and thankful that the office of Sorsogon City Mayor  Sally A. Lee and the Sorsogon City Tourism Office have included his name and photo in the billboard of six of eight Sorsogon gubernatorial candidates. LOLO Bobby said that the “catch” of the ad is actually a backhanded endorsement of one of the candidates, Eric Dioneda (PDP-Laban), whose educational attainment was portrayed as a college undergraduate first-year midwifery education. Mayor Lee’s son, Bobet Lee Rodrigueza (Liberal Party), is portrayed as a holder of a BSBA-Management degree while LOLO Bobby Reyes is a college graduate in AB Journalism. (JGL Photo by Joseph G. Lariosa)

Mr. Reyes said on or before July 1, 2016, the first day of office when he takes over the “Sorsogon Interactive New Government (SING),” he will launch simultaneously 10 or more crash-programmed projects designed to raise dramatically the “Quality of Life (QoL)” of the people of Sorsogon that will lead to eliminate unemployment and underemployment.

He said ten separate task forces, with at least 100 trained staffers each, will be organized and fielded to implement the projects that will translate into hundreds of thousands of new well-paying and permanent jobs.

All local-government units (LGU’s) will be asked to provide more manpower and support to the task forces.

The priority projects will be classified into short-, medium-, and long-term goals that shall be the vehicles needed to accomplish the so-called “PROJECT 2021.” “They will be treated like items in a conveyor belt of an assembly line, so that a long-term project can become a short-term goal if the circumstances and needed resources are present,” Bobby said.

Among the “PROJECT 2021” that will take Sorsogon from 20th to the 21st century (2016-2021) are introducing to the province a Health Maintenance Organization that will provide “Patients’ Rights and Responsibilities” (https://www.facebook.com/groups/216368558400241); education reforms, including retraining of teachers, increasing their salaries, lowering teacher-student ratio, school-provided meals to elementary students and acquisition of modern equipment (https://www.facebook.com/groups/390671054351428/); inspection and retrofitting of concrete buildings in the province, including churches, followed by school-based earthquake-and-other-disaster-preparation classes and training and fielding of trained volunteer fire-and-disaster brigades;

Organization or re-organization of tree-farming co-ops in all the province’s 541 barangays (barrios) and crash program of planting cacao, coffee and cash crops and their shade trees, including an extensive cultivation of bamboo, so as to double the income of participating families in five to ten years, thereby wiping out poverty;  organization and reorganization of fishing co-ops in all the coastal barrios of the province, including the massive cleaning (every weekend) of Sorsogon Bay, the province’s 50 rivers and numerous springs, brooks and other bodies of water and reforestation of their watershed areas. (http://www.mabuhayradio.com/ecology-and-the-environment/the-save-our-sorsogon-sos-bay-initiative); 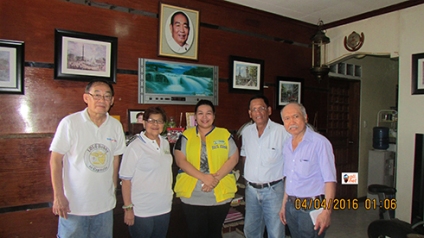 (LOLO BOBBY M. Reyes (extreme left) paid a courtesy call on Flor Solis (second from left), widow of the late Sorsogon Rep. Jose Solis (whose photo is hanging above) of the second district of Sorsogon, who lobbied for the construction of the Bulan Airport, in the house of Mrs. Solis and her daughter-in-law, Joanne Solis, who is running for provincial board member for the second district of Sorsogon, Bubot Laguna and journalist, Joseph G. Lariosa. (JGL Photo)

The fresh water of Sorsogon’s 50 rivers and other springs, brooks and streams can be harnessed and exported to different parched countries as today clean potable water is more expensive than crude oil or even gasoline. Launching of food-production centers with grain-storage silos, solar-powered refrigerated warehouse and other equipment; Concreting of the runways, aprons parking spaces of the Bulan and Bacon airports, the construction of control towers, with electronic-and-electrical facilities and fuel depots. (https://www.facebook.com/notes/bobby-m-reyes/how-to-complete-the-bulan-airport-as-revised/10202484307966425); the “New Uber-like Parcel Service and Postal House” (www.nupsph.com); solving the growing squatter problem; massive tourism development program; launching of a law-and-order campaign with a “reinvented” Sorsogon Provincial Sheriff’s Office and fielding of one law-enforcement officer (LEO) with training of five employees that will compose a security force of 5,000 to safeguard millions  of domestic and foreign tourists.
And many other projects that include development of stock market, title insurance industry, workmen’s compensation industry, crop-insurance and/or health-insurance industry, broadband industry, call centers, water parks, solid waste, waste-water (for the Bac-Man geothermal plant) and sewage treatment plants and other environmental friendly energy projects. (jglariosa@hotmail.com)

Like Loading...
‹ OVERSEAS VOTERS VOTING IN PERSON MUST DEMAND A RECEIPT
Art and Family: The Asuncion Legacy ›